What One Jill Learned From Another: on Skiing and Recovery from Spinal Cord Injury

What one Jill learned from another: on Skiing and recovery from Spinal Cord Injury

When I was a teenager, I was looking through the TV Guide and saw that the Sunday Night Movie was about a teenager named Jill who suffered a ski accident.  I’d never been skiing but I didn’t know too many other Jills so I thought I would watch the movie.  It was a life changing experience.  As some of you may guess, the movie was called “The Other Side of The Mountain” and it was about a skier name Jill Kinmont.

Jill Kinmont Boothe was the national women's slalom champion and on the cover of Sports Illustrated when she competed in a 1955 race to qualify for the U.S. Olympic ski team. Speeding down an icy Utah ski slope, she lost control, struck a spectator, crashed and hit a tree. She broke her neck and suffered high level quadriplegia.
I was transfixed by her story.  She suffered multiple tragedies beyond her initial injury and yet her strength and resilience kept rebounding and she found ways to go on with a meaningful and productive life, although she never skied again.  I read her books and watched the movie’s sequel.  I thought she was amazing.  Whenever I felt like I couldn’t do something because it was too hard, I imagined how she pushed herself and I pushed myself too.  I also became fascinated with skiing, which I’d never tried.  I learned to ski and fell in love with the sport.

In 1982, I was spending a research year at Stanford while getting my doctorate from USC.  I was driving my car on El Camino Real in Mountain View California.  The person driving the car behind me didn’t realize I was stopped at a red light.  He slammed into me going 35 miles per hour.  Initially, I thought I was fine and I went home.  In the morning, I awakened with pain and numbness in my hands and arms.  X-rays at Stanford University Hospital (this was pre-MRI) revealed a C-7 “clay-shovelers” fracture.  I cried when I thought about skiing and the bike that I might never ride again.  And then I remembered Jill Kinmont.  If she could prevail I could too.
This sparked my lifelong interest in behavioral medicine and rehabilitation psychology.  By the end of 1983, I was back on my bike and the following winter I was back on my skis.  I chose to specialize in spinal cord injury psychology and chronic pain management during my psychology residency.  In 1990, I took a job as the psychologist on the Spinal Cord Injury Unit at the VA Hospital in San Antonio, TX.  In 1997, I spoke at the American Association of Spinal Cord Injury Psychologists and Social Workers conference.  The speaker who followed my talk was Jill Kinmont Booth.  After she finished, I walked up to her put out my hand to shake hers (she had learned a graceful way to do this, as many people with quadriplegia do).  I said “Hi Jill, I’m Jill and I’ve been wanting to meet you since I was a young teenager.”  I got to spend time with her and her husband, snapped some priceless photos and was able to share my story.  It was a wonderful moment for us both. 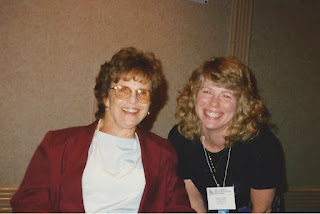 Jill Kinmont Boothe (who sadly passed away this February at the age of 75) and I were both featured speakers at the American Association of Spinal Cord Injury Professionals conference in September 1997 in Las Vegas, NV

On Christmas Eve 2001, I suddenly experienced the spontaneous rupture of two discs in my cervical spine at C4-5 and C5-6.  I had an emergency discectomy and fusion the first week in January and had to start my rehabilitation from scratch with significant weakness, some neurological symptoms and pain.  I was able to see and read my MRIs so I knew what damage Dr. Swan had to fix.  Little pieces of the ruptured discs had to be delicately extricated from my spinal cord before the fusion could take place.  I adjusted my attitude in the positive direction and spent the time prior to my surgery visualizing the upcoming repair and restoration of my spinal cord.

Post-up, Dr. Swan came to check on me shaking his head.  When he realized he’d frightened me he quickly clarified my misperception.  He said “Its remarkable.  What I saw when I went in bore only slight resemblance to what the MRI showed.  I actually made them pull a fresh copy of the films to verify I had the right patients films and I did.  The site I was operating on was much cleaner and easier to work with than I had been lead to believe from the imaging studies.  As a result, a projected 4+ hour surgery was successfully completed in 90 minutes.”

When I had awakened from the anesthesia, I could move my arms and feel my fingers again.  And Dr. Swan had (appropriately, given his name) appreciated the importance of a lovely neck so he brought in a top plastic surgeon to close my incision.  Usually a dry pragmatic man, my neurosurgeon was floored by my amazing recovery.  I went through extensive PT (at Health South where the San Antonio Spurs go) to overcome weakness in my arms and a drop foot on the right.  Once again, I had been told “no more skiing”.

I finally got to test my compliance to the doctor’s order last year when we came to use our time share in Avon Colorado and ski at Beaver Creek.  I was apprehensive.  I relished the cold smoothness of my skis as I put them on and the satisfying snap as the boots locked into the bindings, I took it easy and only got a bunny slope ticket to give a nod to caution.  I got to the top of the slope, pointed my skis in the right direction and ‘woosh', I was flying.  For the first time in over 20 years I have my own equipment again and nothing except common sense will hold me back.  I’m a skier again and I’m a skier who now lives in the Vail Valley.  A dream come true! 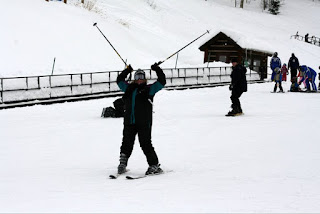 Not to be copied without written permission.
Text copyright 2012 by Jill Squyres, PhD.  All Rights Reserved