“You do this long enough, you really learn to read people.”...Don Ward

It’s Wednesday evening and we are wandering around Times Square in NYC looking for the Ed Sullivan Theater so we can bask in the illusion of close proximity to David Letterman.

We are back east for my 35th high school reunion, which will be held in the suburban county I lived in when I was a teenager. My husband, who likes getting his shoes shined whenever we are at the airport, is a little frustrated. We had anticipated a lengthy layover at DFW, where he planned to get his traditional airport ritual shoeshine. Fortunately for us, American Airlines was able to put us on an earlier flight to Laguardia. Unfortunately for his shoes, this obstructed his plans for that DFW shoeshine.

Our early arrival allowed us to head into Manhattan for some sightseeing and dinner. We decide to seek out the Ed Sullivan Theater to see if the “Hello Deli”, which has featured prominently on the Letterman show, might be open for dinner. So long as we have TV shows on the brain, we stroll in the direction of 30 Rock. Lo and behold, on a nearby corner, there is a cheerful fellow briskly shining the shoes of a contented gentleman comfortably perched in the chair of a bright blue shoeshine stand.

As my husband takes his turn in the “hot seat”, the shoeshiner applies himself to the task at hand and we begin to chat. It turns out we are both NYC natives, although he is from Brooklyn while I am originally from the Bronx. He tells us his name is Don Ward. He has been shining shoes for over 20 years, after trying his hand at several other professions, which he found did not suit him. The intersection of 47th street and 6th Avenue is “his corner.” His broad smile is infectious and his jokester gregariousness is captivating. And he is full of wonderful stories. In fact, he is such a gifted raconteur that it is an unbridled pleasure to simply listen to him talk. Eventually, I mention that I am a psychologist and he perks up significantly beyond his usual perky baseline. He speaks eloquently and soulfully of what he’s gleaned from his years of experience meeting people, shining their shoes and keenly observing the action as pedestrians traverse “his corner”.  In fact, he proudly flourishes a magazine article written about him, which prompts me to listen even more carefully to what he has to say.

As a psychologist, listening to and understanding people is what I do. As a shoe shiner, listening to and understanding people augments Mr. Ward’s obvious pleasure in a shoe well shined, a job well done and the creation of yet another happy customer.  Mr. Ward, it turns out, is far more than a shoe shining professional; he is a silver-tongued shoe shining philosopher and a very interesting one to boot (get the pun?). His good-natured acceptance of the value of hard work, his well-honed commitment to personal excellence and his earnest respect for looking polished and taking good care of yourself have provided him with a treasure trove of wisdom, which he is delighted to share with all comers. He has uncannily accurate intuition about what a person is really like based on only a brief snippet of observation. Over time, he has cultivated an astute understanding of what makes a good person good. With humble eloquence, he shares fascinating stories and observations to illustrate his insights. Mr. Ward exudes good cheer, confidence and humanism. His life has clearly not been easy, but he firmly believes it has been unequivocally good. His 48 years rest lightly on his shoulders, as he looks much younger than his stated age. He has pulled himself up by his own bootstraps (forgive me for yet another pun). His shoeshine business has a devoted clientele whose loyalty is likely based on his sparkling personality as much as on the sparkling footwear he bequeaths to his customers. In fact, in one of his most inspiring stories, he tells of coming to work one day and finding his shoeshine stand had vanished during the night. In his own words, “When you work outside on a corner in New York City, you know that eventually, this is going to happen to you. So you don’t get upset, you simply rebuild.” With a little help from his friends he was back in business in no time. “Besides,” he points out, “I really like the blue stand, my previous one was brown and this one is much nicer looking.” Wow. Isn’t that a brilliant example of making a silk purse out of a sow’s ear? 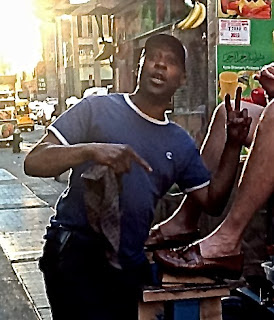 When your toes no longer twinkle, your spats have lost their spiff, your soul is weary and you need happy feet, you have many options. Psychotherapy is one possibility. A chance encounter with a street corner sage can be another. If you find yourself in Manhattan needing a smile and glossy footwear, remember to stop by Don Ward’s corner for the best shoeshine of your life, with a little wisdom and good cheer thrown in for no extra charge. You will come away well heeled in more ways than you probably anticipated.  Don’t be surprised to find a grin on your face and a spring in your step that has little to do with shiny shoes. That is the magic of Don Ward, “The shoeshine dude” and streetcorner philosopher of 47th and 6th streets, NYC.

For a Youtube glimpse of the charming Don Ward, click on the link below:
Don Ward, Shoe Shiner Extraordinaire